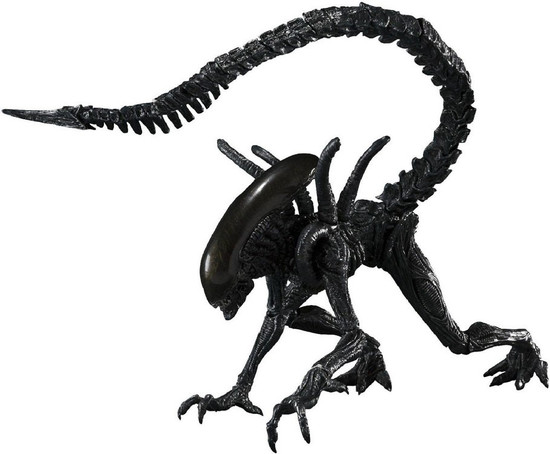 Please note to our International Buyers: We cannot ship Bandai America products outside of the United States & Canada. Sorry for the inconvenince.
$204.99
(You save )

Standing approximately 6.7 inches. Alien Warrior:
The premiere release in the series is the Alien Warrior from the 2004 AVP film. In the movie, this sleek re-working of the original Alien design was animated using CG techniques to portray its inhuman sense of balance and motion. The S.H. MonsterArts figure perfectly replicates this on-screen appearance. The joint system has been specially designed to allow dynamic poses without breaking the figure's distinctive silhouette. The unique head structure is rendered with translucent plastic. Thorough research allowed us to bring subtle organic details that were almost impossible to see on-screen to life in the sculpt, and every effort was made to conceal the joints for a natural appearance. The S.H. MonsterArts edition of the Alien Warrior represents a new pinnacle for Alien action figures.
The aggressive nature of the Alien is accentuated by its ferocious-looking inner mouth and its giant, spiked tail. We paid special attention to these key "weapons" of the creature. The top of the head can be slid to open the main mouth and reveal the threatening inner mouth. And the tail was provided with joints to allow multiple degrees of freedom for achieving and holding the subtlest poses. And the tip of the tail uses diecast metal parts to achieve.
Accessories include a finely detailed egg chamber and the "juvenile" form of the Warrior, the "chestburster." All can be displayed together to expand your display possibilities. Two different hand variations are included as well, for enhanced posing and expressiveness.

For Ages 21+ These figures feature many small joints and are for adult collectors to pose, not for heavy play-use! We will NOT accept any returns on opened product.
shmalienwar
4543112851765
80650
In Stock
New