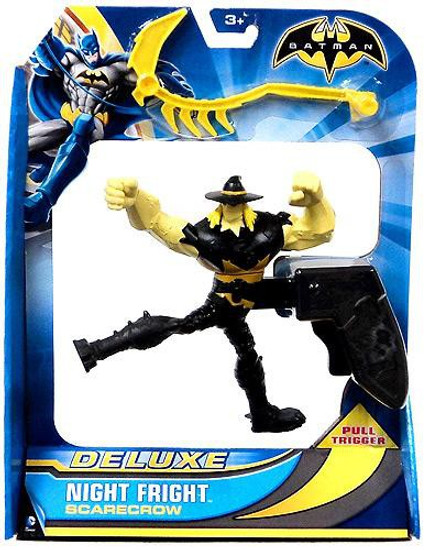 Both collectors and kids love these 6-inch figures of favorite DC characters that battle like you have never seen before - cyclone style! With a pull of a trigger, the figures spin to kick, punch and fight. Each comes with a unique, iconic weapon, too. Spar heroes against one another, or recreate your favorite DC-inspired defensive and offensive villain vs. vigilante moves. The characters in this captivating collection include Ice Strike Mr. Freeze Deluxe Figure, Combat Staff Batman Deluxe Figure, martial arts menace Night Fright Scarecrow Deluxe Figure and Sword Storm Batman Deluxe Figure. Collect them all and battle it out cyclone style. These super cool figures and powerful, inventive weapons deliver new kinds of epic combat fun! Each sold separately, collect all your favorite Batman heroes and villains!
nightscarecrow
746775335960
83019
Out of Stock
New