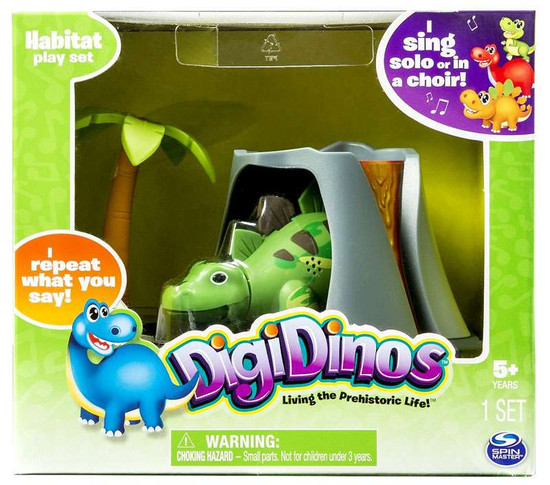 We talk! We sing! We move! Go back in time to when dinosaurs ruled with Mimic's DigiDino Habitat Playset! Was that an echo? No, it's Mimic being his silly DigiDino self! This hilarious Stegosaurus can replicate anything he hears, especially beautiful songs sung by his DigiFriends! Mimic loves hanging out in the heat of his Volcano and singing all day long! Watch this solo Dino tweet you 58 beautiful tunes. The DigiDino Habitat lets him play or hang out on display! DigiDino's come to life through song and movement. Clap your hands in Solo Mode to activate Clap 'N Play and they'll record and repeat it back what you say! DigiDinos get even better; when they're close they sing together. Collect multiple Dinos to hear them harmonize as you build a DigiDino choir. They even sync and sing with other DigiFriends, too. Download the free DigiBird app to unlock even more beautiful songs! Start living the prehistoric life with the Mimic DigiDino Habitat Playset!
digidinomimic
778988139042
109839
Out of Stock
New