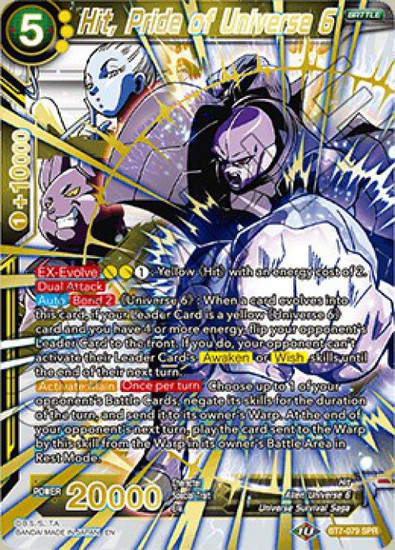 BATTLE. Yellow. Combo Energy: 1. Power: 20000. Combo Power: 10000. Character: Hit. Special Trait: Alien/Universe 6. Era: Universe Survival Saga. Character: Hit. Skill: EX-Evolve. ..one. : Yellow Hit with an energy cost of 2.
Dual Attack.
Auto.Bond 2. Universe 6 : When a card evolves into this card, if your Leader Card is a yellow Universe 6 card and you have 4 or more energy, flip your opponent's Leader Card to the front. If you do, your opponent can't activate their Leader Card's Awaken. or Wish. skills until the end of their next turn.
Activate Main.Once per turn. Choose up to 1 of your opponent's Battle Cards, negate its skills for the duration of the turn, and send it to its owner's Warp. At the end of your opponent's next turn, play the card sent to the Warp by this skill from the Warp in its owner's Battle Area in Rest Mode.
bt7079sprhitprideofuniverse6
315169
Out of Stock
New