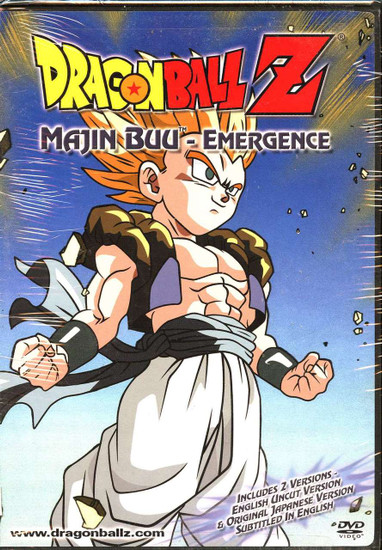 Out From the Broken Sword - Gohan accidentally breaks the Z Sword, and Old Kai appears, released from the sword. He agrees to bring out Gohan?s Latent Capacities if Goku will find him a girl he can feel on. Piccolo continues training the boys.

Gotenks Is Born - Goten and Trunks begin fusion. They try twice and mess up, creating a fat Gotenks and then a bony one. Finally they form a correct Gotenks, and he heads down foolishly to fight Buu. Buu topples him. Gotenks returns to the Lookout to train.

I Kill No More - Buu heals an inured puppy, and the puppy clings to him. Feeling liked by the puppy and Mr. Satan, Buu is suddenly happy. To please Mr. Satan, Buu announces he won?t kill people anymore. But two snipers appear after killing several innocents and shoot Buu?s puppy. Buu gets angry.
dragonballzdvdemergencemaijinbuu
704400030604
172966
Out of Stock
New