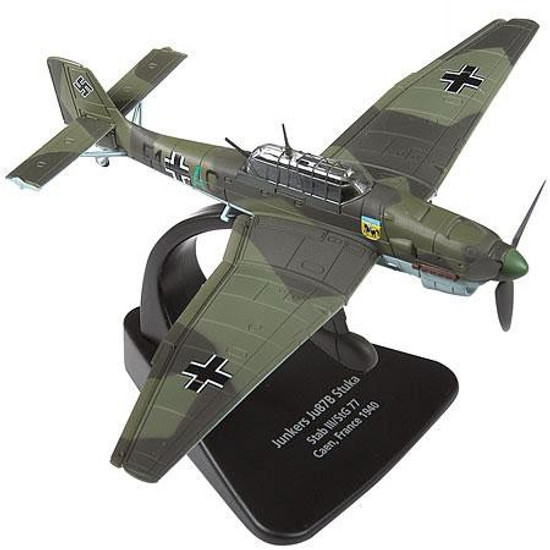 The German Ju87 Stuka was the epitome of the fear felt towards the German Luftwaffe. Although slow and under armed, the Junkers Stuka was one of the most feared light dive-bombers primarily because of a definitive gut wrenching siren whine as it swooped in to attack. Although both the Japanese Military and the U.S. Military developed dive bombers in WWII, only the Junkers Stuka was a successful land based dive bomber.

One of the most feared airplanes of the Third Reich, the Junkers Sturzkamfflugzeug (Dive Bomber) proved its effectiveness during the Battle of Britain. It was heavily used throughout World War II on both the Western and Eastern Fronts as well as in North Africa. Highly recognizable with its inverted gull wings and fixed landing gear (complete with propeller-whistles), the Stuka is a must for any collection.

This die-cast 1:72 scale German Junkers Ju87B Stuka is part of the Front Line Fighters series of die cast aircraft from Oxford Diecast. It depicts the Ju87B Stuka flown by Stab III./St.G.77 Gruppenkommandeur Major Helmut Bode when the unit was stationed in Caen, France, in August, 1940.

This highly-detailed die-cast German Junkers Ju87B Stuka is approximately 6.5 inches long and has a wingspan of approximately 7.5 inches. It has many detailed features, including textured surfaces, a detailed cockpit and rear gunner's station with a glazed canopy, a rotating propeller, inverted gull wing with realistic air brakes, detailed landing gear with wheel pants, and authentic markings (including the unit badge that was based on Bode's family arms). This German Ju87B Stuka also includes a display stand that identifies the aircraft and pilot.
germanju87b2stuka
018876853309
237152
Out of Stock
New