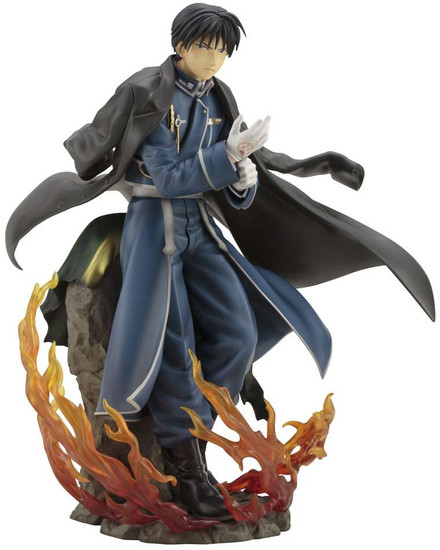 A KOTOBUKIYA Japanese import! Alchemy and transmutations are coming to the ARTFXJ Statue lineup (a bold expansion designed "to bring Japanese characters to their fans worldwide") with the new addition of Fullmetal Alchemist and its anime retelling. Coming from an alternate world of scientific magic and strange creatures is one of the most popular characters from the series as he appears in the Brotherhood manga adaptation, ROY MUSTANG! A State Alchemist of Amestris known as the "Flame Alchemist" for his fondness for fire-based effects, Roy was a staunch supporter of his military and government until he discovered the corruption at its highest levels. Now he has been transmuted into the real world looking like he stepped right out of the anime series! Mustang leans against a low, broken wall, surrounded by fire and ready to summon more. Roy wears his highly detailed State Alchemist uniform complete with black boots and blue and gray matching trousers and long jacket; as an officer he is decorated with rank and other insignia on his chest, collar, and shoulders. An unseen wind fans his flames and stirs his clothing with realistic movement, and he looks toward you with an intense expression on his face that promises more destruction if his orders are not obeyed. Roy also wears his signature white gloves with red transmutation circles on them, and behind him flutters a tattered Amestris state flag. You can even display your State Alchemist in different ways, with or without his windblown black overcoat draped over his shoulders! Sculpted by Tsukuru Shirahige, Roy Mustang is just over 9 inches tall (1/8 scale) as he rests against the battlefield debris. Bring home the Flame Alchemist and never worry about homunculi again!
feb172864
190526001589
151745
In Stock
New