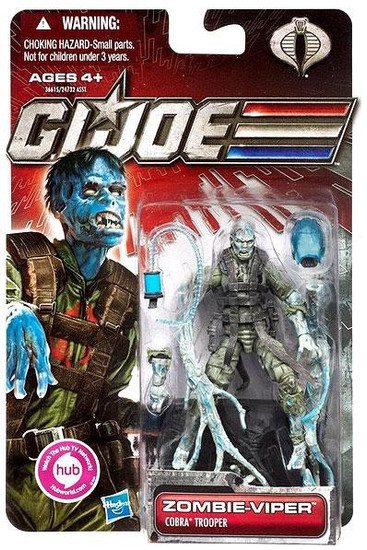 ZOMBIE-VIPERS are COBRA infantry troopers who have been given a mysterious chemical substance, Compound Z, that has turned them into drones. Wiped of all thought, they follow orders mindlessly and cannot be reasoned with or sidetracked. They have retained their skill at combat; in fact, their desire to fight has been increased, making them more dangerous than before. In other words, they are deadly zombie warriors.

The battle for homeland security has just begun, and your ZOMBIE-VIPER COBRA Trooper figure is ready to cause some trouble! This detailed figure has alternate arms and hands and the weapons he needs to be part of your wildest G.I. JOE adventures. When the action is over for the day, stand him on his battle base in your collection!

Figure comes with weapon accessories and battle base.