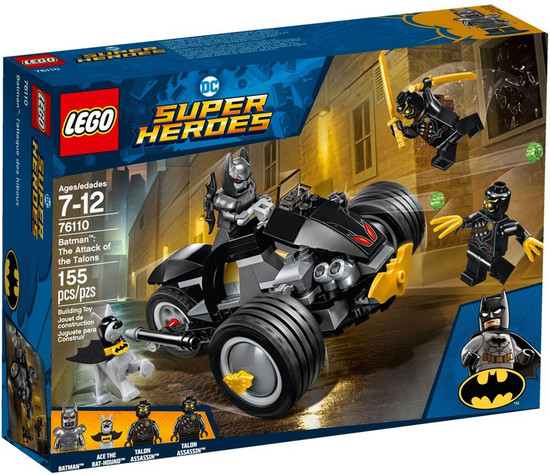 Team up with Batman and Ace the Bat-Hound to defeat the Talon Assassins in LEGO DC Super Heroes 76110 Batman: The Attack of the Talons, featuring Batmans Bike with a dual stud shooter and attachment points for the included pack of assorted Bat weapons and elements. This set includes 3 minifigures with weapons to boost the role-play battle action.
Includes 3 LEGO DC Super Heroes minifigures: Batman (with armor decoration) and 2 Talon Assassins, plus Ace the Bat-Hound figure.
Batmans Bike features an open minifigure cockpit, space for Ace the Bat-Hound to stand, dual stud shooter, 3 big wheels and 2 rear mufflers.
Includes 11 new-for-August-2018 Bat weapons and elements to customize your builds and minifigures.
Weapons include the Talon Assassins' 2 ninja swords and 2 claws.
lego76110
673419280938
267943
In Stock
New