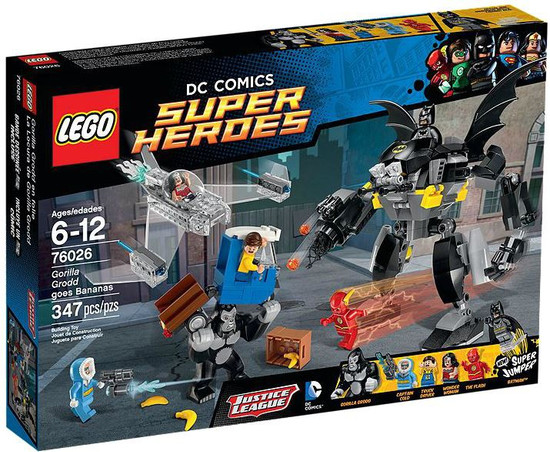 Protect the truck driver from banana-hungry Gorilla Grodd!
Gorilla Grodd is causing havoc in Gotham City as he seeks his morning banana fix! The gigantic gorilla is leaping on the truck, sending crates of bananas flying and almost breaking the vehicle in half. Hurry to save the terrified driver with Batman and his awesome Bat-Mech. Launch a triple LEGO Super Heroes counter-attack by firing the net and stud shooters. Face off against mighty Gorilla Grodd with The Flash, evading the evil beast's grabbing fists and Captain Cold and his Devastating Ice Shooter. Swoop unseen into battle with Wonder Woman in her Invisible Jet with spring-loaded missiles, then send Batman leaping off the top of the Mech with the Super Jumper to bring down Gorilla Grodd! Includes 4 minifigures with assorted weapons and accessories: The Flash, Wonder Woman, Batman and Captain Cold, plus a Gorilla Grodd figure.
Bat-Mech features giant bat wings, poseable arms and legs, net shooter, 2 stud shooters and cockpit with Super Jumper launch mode
Invisible Jet features an opening cockpit, 'invisible' flame exhausts and 2 spring-loaded missiles
Gorilla Grodd and Captain Cold are all-new LEGO minifigures and exclusive to this set!
Bat-Mech measures over 7" (18cm) high, 3" (8cm) long and 8" (21cm) wide
Invisible Jet measures over 2" (6cm) high, 6" (17cm) long and 8" (22cm) wide.
lego76026
673419231732
100462
In Stock
New