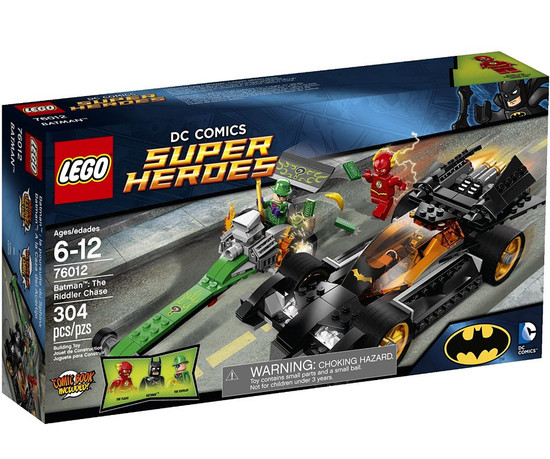 Pursue The Riddlers Dragster and call in The Flash to catch him!
The Riddler has robbed the Gotham City bank and is getting away in his ultra-fast dragster. Pursue him with Batman in his sleek new Batmobile, but watch out for the bombs being dropped by the dragster. If The Riddler manages to get away, call in help from The Flash, The Fastest Man Alive! Will he arrive in time to save the day? Only you can decide! Includes 3 minifigures with assorted weapons and an accessory: never-before-seen Batman (with new suit) and The Flash, and The Riddler.

Includes 3 minifigures with assorted weapons and an accessory: never-before-seen Batman (with new suit) and The Flash, and The Riddler
Features the Batmobile with detachable cockpit and hidden flick missiles, and The Riddlers dragster with big engine, flames, huge rear wheels, money bags and a detachable bomb
Weapons include Batmans Batarang and a crowbar
Also includes a banana
Leave a slippery banana trap for The Flash
Throw the Batarang and send The Riddler spinning
Pull a scorching wheelie in the dragster and release the bomb
Batmobile measures over 2 (7cm) high, 7 (20cm) long and 3 (9cm) wide
Dragster measures over 2 (6cm) high, 6 (16cm) long and 2 (6cm) wide
lego76012
673419212519
123910
In Stock
New