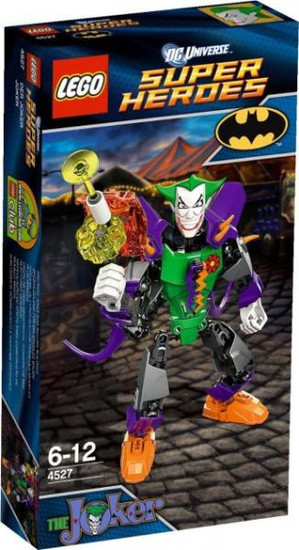 Power up The Joker and cause mayhem in Gotham City!
The Joker is spreading mayhem through the streets of Gotham City and only LEGO Batman can put a stop to his criminal mischief. Hes armed with his powered-up suit and a blaster that shoots venom, smoke bombs, laughing gas and stun rays. Will The Joker prove that his arch enemy is just a big joke? You decide!
* Features The Joker with a powered-up suit and blaster weapon
* Customize your model using the flexible building system!
* Cause mayhem with the blaster!
* Combine with 4528 LEGO Green Lantern to make The Joker even bigger!
* Collect all of the LEGO DC Universe characters: 4526 LEGO Batman and 4528 LEGO Green Lantern
* Stands over 7 (18cm) tall
legodc4527
673419166560
120859
Out of Stock
New