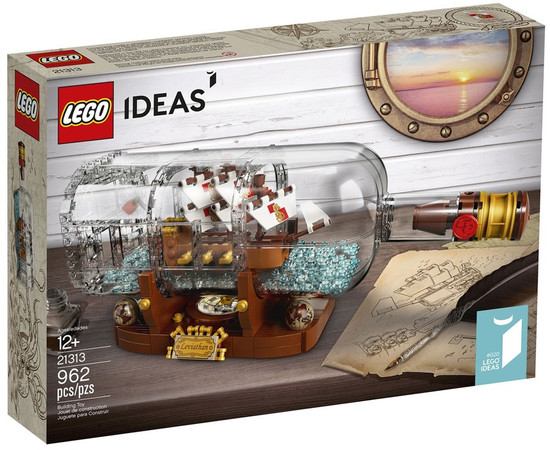 Continue a nautical tradition when you build the LEGO Ideas Ship in a Bottle, featuring a highly detailed ship with the captains quarters, cannons, masts, crows nest and printed sail elements. Fan creator, Jake Sadovich, was inspired by an actual ship in a bottle that he had built a few years earlier when he decided to build a replica in LEGO brick form. His creation reached the qualifying 10,000 votes with LEGO Ideas.
Features a LEGO brick-built bottle, ship and a display stand.
Bottle features a detailed, buildable cork with new-for-February 2018 wax-seal-style element and over 280 translucent-blue, water-style elements inside.
Ship features a raised deck at the stern, captains quarters, 6 cannons, 3 masts, a crows nest and assorted elements including printed sails and the ships flag.
Display stand features the ships Leviathan nameplate, a built-in compass (non-functioning) with detailed compass rose and spinning gold-colored needle, 2 globe elements and gold-colored detailing.
lego21313
673419290951
182847
In Stock
New