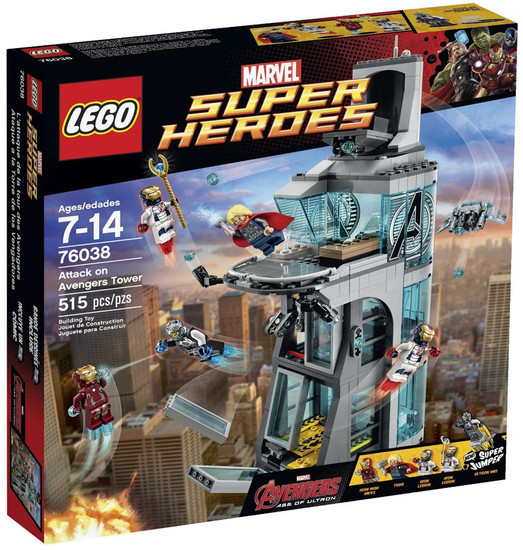 Reclaim the Loki Scepter and stop Ultrons attack on Avengers Tower!
The Heroes are having a party when suddenly Avengers Tower comes under Ultron attack from the inside! Evil Ultron Mark 1 has assembled himself in the lab and is exploding out the windows. Help Iron Man and Thor to defeat Ultron Mark 1 and the 2 Iron Legion accomplices under his control. Make plans in the JARVIS control room and treat injured Super Heroes in the sick bay. An Iron Legion is blasting out the doors and windows of the ground-floor robot bay. The other has stolen the Loki Scepter fromthe analysis lab so pursue him with Thor and take aim from the roof of the tower with the secret hidden drone and stud shooters. You must retrieve the Scepter and stop Ultron Mark 1! Includes 5 minifigures with a weapon and assorted accessories: Ultron Mark 1, 2 Iron Legions, Iron Man and Thor.
Includes 5 minifigures with a weapon and assorted accessories: Ultron Mark 1, 2 Iron Legions, Iron Man and Thor
Features a fold-out function for easy play, robot bay with fire extinguisher, lab with robotic arms, JARVIS control room with hidden weapon, lounge, sick bay with stretcher, analysis lab with the Loki Scepter, top tower with secret hidden drone with 2 stud shooters, 2 roof stud shooters, doors, windows and a balcony with hidden stud shooters, 2 wine glasses, doctors needle and explode function
Includes Thors hammer
Accessories include a Super Jumper and thrusters for Ultron Mark 1, the Iron Legions and Iron Man, plus a wig for Iron Man
Analyze the Loki Scepter in the analysis room
Assemble Ultron Mark 1 in the lab
Explode out the windows for the evil Ultron Mark 1 to escape and the mission begins
Find the hidden weapons in the lounge to take on Ultron Mark 1
Slide open the front doors of the robot bay and send the Iron Legions into battle
Activate the toptowershidden drone for extra stud shooter firepower
Roll out the hidden stud shooters from underneath the spire
Treat injured Super Heroes in the sick bay
Place Ultron Mark 1 on the Super Jumper to explode the balcony
Measures over 14 (37cm) high, 7 (19cm) wide and 4 (11cm) deep
lego76038
673419233651
126524
Out of Stock
New