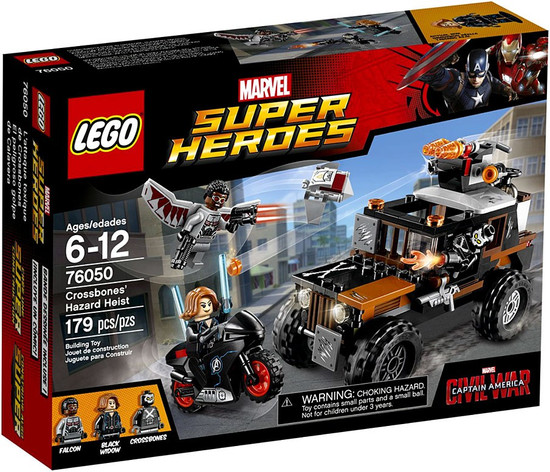 Dodge Crossbones trucks 2 stud shooters, activate the explode function and reclaim the toxic case element. Set includes 3 minifigures, Redwing drone and a bike.
Crossbones has stolen a case of dangerous toxic material and stored it in a container on the truck. Team up with Black Widow and Falcon to stop him. Give chase on Black Widows bike and use her batons to deflect shots from the trucks stud shooter. Fly into action with Falcon and detach the Redwing drone. Explode the container, attach the case to the drone and return it to safety!
Includes 3 minifigures: Crossbones, Black Widow and Falcon.
Crossbones escape truck features big wheels, a removable roof with 2 stud shooters and handlebars for a minifigure to hold, rear storage space with explode function, storage container, toxic case element, plus Crossbones decoration.
Remove the escape trucks roof and use it on the ground as a gun station.
Detach the Redwing drone from Falcons back and use its clip to pick up the biohazard case element.
Do wheelies on Black Widows bike which includes a baton holder.
Weapons include Crossbones fire gun with a translucent fire element, Falcons 2 guns and Black Widows 2 batons.
Also includes a comic book!
lego76050
673419250412
128758
In Stock
New