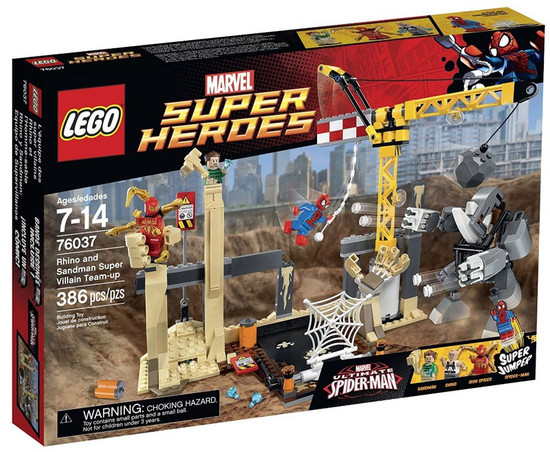 Super-jump Spider-Man to topple the Rhino Mech at the construction site in Rhino and Sandman Super Villain Team-up and find those diamonds!
Save Iron Spider and recover the stolen diamonds!
Sandman and Rhino have joined forces to steal diamonds and now they are hiding out with the loot at the construction site. Rush to recover the stolen jewels with Iron Spider and Spider-Man. But, oh no! The super villains have set an ambush, attacking with the marauding Rhino Mechs stud shooters and trapping Iron Spider in one of Sandmans shape-shifting sand hands. Super-jump to the rescue with Spider-Man, activating the spiders web and the cranes demolition ball to trap and topple the RhinoMech. Then release Iron Spider from the sand hand and knock over the sign with another perfectly aimed jump to reveal the hidden diamonds! Includes 4 minifigures with a weapon element and assorted accessory elements: Spider-Man, Iron Spider, Sandman and Rhino.
lego76037
673419232067
127669
Out of Stock
New