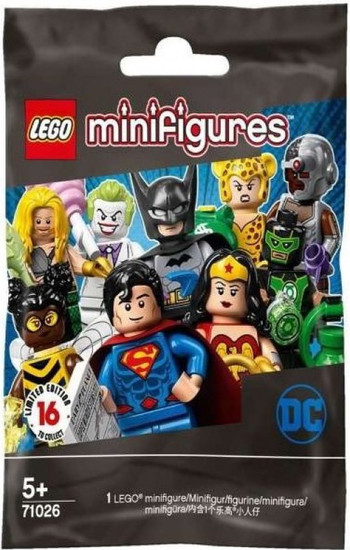 DC superheroes LEGO DC minifigure mystery bags. There will be 16 minifigures included covering a wide variety of appearances throughout all of DC history. Some of the best ones to make a note of are Flash Earth-2 Jay Garrick, Huntress, Metamorpho, Bumblebee and Star Girl. Why the sketchers dont get a lot of figure treatment so its nice when the company decides to let some of these characters shine. We do get other big leagues like Wonder Woman (1941), Superman, First Appearance Batman, and Cyborg. With the upcoming Star Girl series coming soon it would be nice to hold onto one of these sealed with her LEGO DC figure in it just in case that show blows up *wink wink* collectors. There are other characters included like some famous villains and wacky characters like Sinestro, Cheetah, Joker from the Dark Knight Returns series, Simon Baz Green Lantern and Mister Miracle.
Aquaman
Batman (1939)
Bat-Mite
Bumblebee
Cyborg
Flash (Jay Garrick)
Green Lantern (Simon Baz)
Huntress
Metamorpho
Mister Miracle
Cheetah
Joker (The Dark Knight Returns)
Sinestro
Star Girl
Superman (Rebirth)
Wonder Woman (1941).
legodcmysterypack
673419319362
317424
In Stock
New