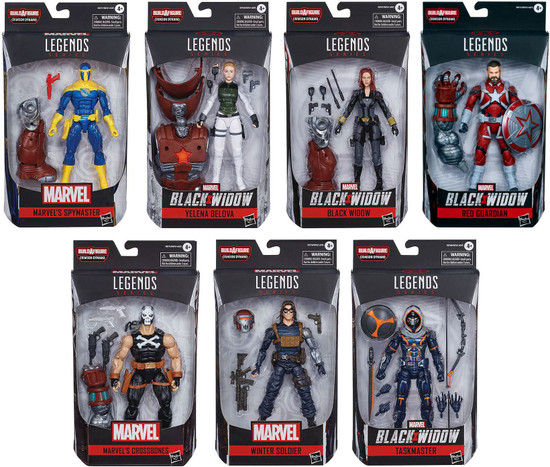 With over 80 years of comic book history, Marvel has become a cornerstone of fan collections around the world. With the Marvel Legends Series, fan favorite Marvel Comic Universe and Marvel Cinematic Universe characters are designed with premium detail and articulation for top-of-the-line poseable and displayable collectibles.
Natasha Romanoff reunites with a group of spies from her past to stop a lethal force. Enter the world of Marvels Black Widow movie with Legends Series figures!
Taskmaster is armed with the ability to mimic an enemys every move.
A product of the Red Room's ruthless training program, Yelena Belova is a fiery assassin.
Winter Soldier is a fierce combatant and an asset in battle, no matter which team he fights for.
An undercover operative skilled in sabotage, Spymaster possesses superb fighting capabilities.
Crossbones makes it his mission to take out Captain America, no matter the loss of life at stake.
Alexei Shostakov is a super soldier and spy who has lived a lifetime of triumph during the Cold War.
e87615l00set
0609411447826
316287
In Stock
New