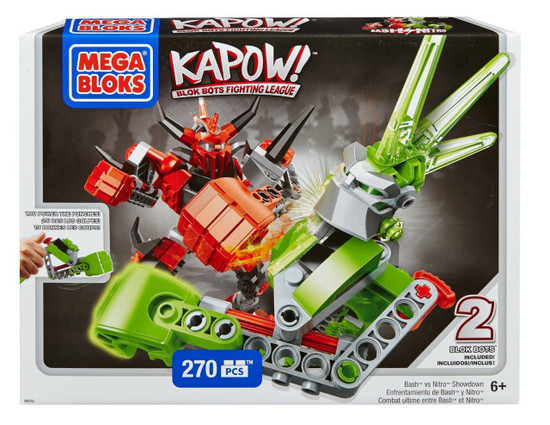 Prepare for an epic brawl with the Bash vs. Nitro Showdown by Mega Bloks Kapow! Bash and Nitro are two of the most powerful bots to enter the arena, with both sides battling for victory in the Kapow! Blok Bots Fighting League!
Brace yourself for the brute force of Bash. With his signature volcanic red blocks, this unpredictable brawler uses the Bruiser Backfist to deliver a calculating series of blinding, body jabs. And in the other corner, Nitro, the scrappy street fighter, prepares his rapid right chop, the Radioactive Corkscrew! His mighty mohawk and graphic green blocks make him an unforgettable and worthy opponent.
Ideal for ages 6 and up.
Features:
Two buildable Robots: Bash and Nitro
Claim victory when you blast back your opponents top
Control the punches yourself using the adjustable pistons to control the jabs
Knock blocks off your opponent and use them to customize your own bot!
Collect and battle them all!
mega94215
065541942158
124719
In Stock
New