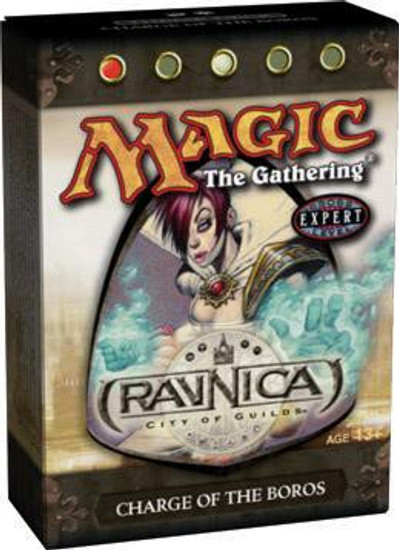 Please note to our International Buyers: We cannot ship sealed Magic: The Gathering products outside of the United States. Sorry for the inconvenience.
$80.99
(You save )

The "Charge of the Boros" deck shows off what the Boros Legion does well: fight. This fanatical guild merges red's passion and fury with white's battlefield precision to make a sleek fighting force that steamrolls its opposition.

As the game progresses, your opponent will try to stop your advancing army. Your goal is to keep dealing damage by any means possible. Skyknight Legionnaire has it easywith haste and flying, it'll be difficult to stop. Your ground forces, on the other hand, might need some help. Thundersong Trumpeter prevents your opponent's best creature from blocking, and Cyclopean Snare has a similar function. Your various instants provide even better tools for forcing damage through: Lightning Helix and Dogpile can easily clear a path for your attacking creatures. Play Dogpile after you attack but before your opponent blocks for maximum effect.

Radiance spells work amazingly well when played on a multicolored creature. If you play Rally the Righteous on your Skyknight Legionnaire, all other red creatures and white creatures (in other words, all of your creatures) untap and get +2/+0. If you use the devastating Cleansing Beam on your opponent's blue-black creature, it deals 2 damage to each blue creature and black creature in the game. Be careful if your creatures and your opponent's creatures share a color!

After playing the deck a few times, you might want to change some cards. To improve the deck's aggressive nature, add more one-mana and two-mana creatures like Frenzied Goblin and Veteran Armorer from the Ravnica: City of Guilds set. If you like blowing up your opponent's creatures, try more direct-damage spells such as the powerful Char. If you're really adventurous, check out some of the other cards the Boros guild has to offer, like Firemane Angel, Brightflame, and Sunhome Enforcer.
borosranivathemedeckmagic
0604966602720
116995
In Stock
New