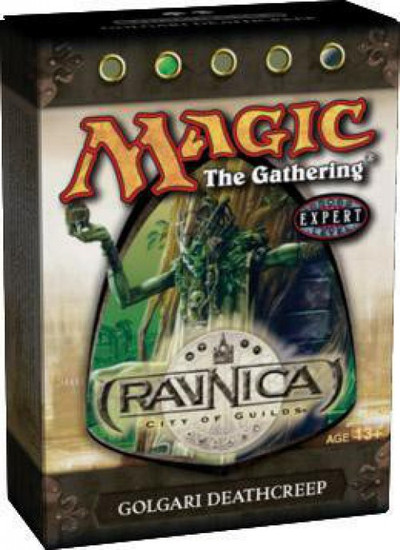 Please note to our International Buyers: We cannot ship sealed Magic: The Gathering products outside of the United States. Sorry for the inconvenience.
Out of Stock
(You save )

With the "Golgari Deathcreep" deck, death isn't where life endsit's where it begins. Your graveyard will be your greatest resource while playing this deck. Why settle for what might be on top of your library when you can instead pick the best dredge card in your graveyard each turn?

Start out by getting a card with dredge into your graveyard as early as possible. The best ways to do this are to take down an opposing creature with Darkblast or sacrifice a Shambling Shell after it deals combat damage. Next turn, use that card's dredge ability to return it to your hand. As you stuff your graveyard full of cards from your library, you'll see more cards with dredge in there, giving you more options. Eventually, you'll never need to draw another card from your libraryeverything you need will be in your graveyard.

A fat graveyard also gives you lots of juicy, rotting targets for Vigor Mortis, Recollect, and Necromantic Thirst, and your Golgari Grave-Troll and Svogthos, the Restless Tomb will be huge as well. Both creatures are tough to stop (the Grave-Troll regenerates and Svogthos isn't a creature all the time), so either one should let you ooze your way to victory.

The scariest card in the deck is Savra, Queen of the Golgari. Each time you sacrifice Shambling Shell with Savra around, you can have your opponent sacrifice a creature and you put a +1/+1 counter on a creature. Even better, you can dredge up the Shell and do it again! To Savra's delight, the deck has plenty of other cards that let you sacrifice creatures, including Thoughtpicker Witch, Golgari Guildmage, and Drooling Groodion. Don't worrythe creatures you send to your graveyard will probably crawl right back out.

After playing with the deck, you might want to add some other cards from the Ravnica: City of Guilds set. Life from the Loam fits perfectly: This dredge card starts your graveyard-filling effort early and returns lands (including Svogthos) from your graveyard later on. Adding Grave-Shell Scarab, another dredge card, adds a powerful threat that keeps coming back to life. And if you play with multiple copies of creatures, Bloodbond March can let clusters of them spring back into play from your well-stocked graveyard.
golgarideathcreepranivathemedeckmagic
634746385802
117016
Out of Stock
New