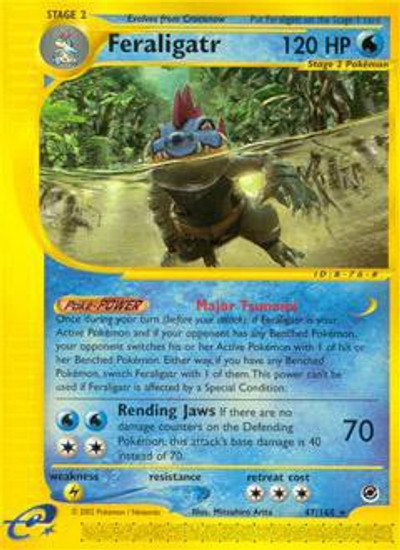 Cards may be normal or reverse foil we do not differentiate between the two.
Out of Stock
(You save )

Water. Stage 2. 120HP. Weakness: L. Retreat Cost: 3. Major Tsunami - Once during your turn (before you attack), if Feraligatr is your Active Pokemon and if your opponent has any Benched Pokemon, your opponent switches his or her Active Pokemon with 1 of his or her Benched Pokemon. Either way, if you have any Benched Pokemon, switch Feraligatr with 1 of them. This power can't be used if Feraligatr is affected by a Special Condition. (Poke-POWER) [2WW] Rending Jaws (70) If there are no damage counters on the Defending Pokemon, this attack's base damage is 40 instead of 70.
pokemonexp047
228057
Out of Stock
New