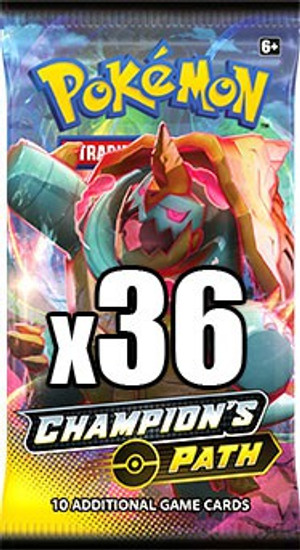 All Booster Packs sold on ToyWiz.com are pulled from fresh factory sealed product. They are completely Clean, Mint and Untampered with ... GUARANTEED!
$449.99
(You save )

36 Pack LOT of Pokemon TCG Champions Path Booster Packs! 10 Pokemon cards per pack! Embark on an exciting new adventure through the Galar region with the Pokémon TCG: Champion's Path expansion! In this special expansion, you'll encounter the region's many Gym Leaders and the Pokémon partners that battle alongside them. There are powerful Pokémon V like Eldegoss V, Lucario V, Duraludon V, and many others. That's not all, as you'll also find massive Pokémon VMAX, such as Drednaw VMAX and Alcremie VMAX. But you're not the only one on the path to the championshipyour rivals are determined to make it to the top as well. Hit the Gyms and blaze your own path with the Pokémon TCG: Champion's Path expansion!
pokemonchampionspathboosterbox
701575692354
348748
In Stock
New