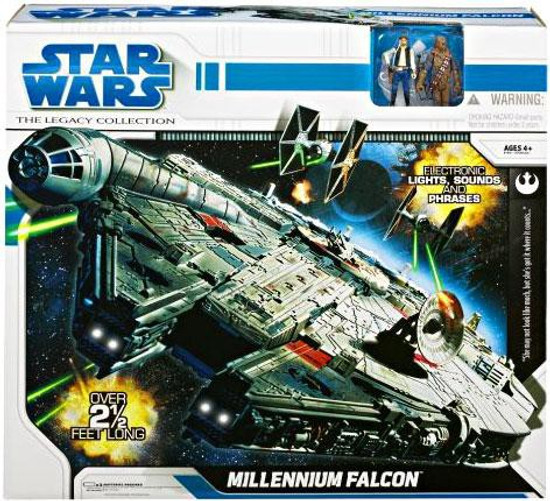 Best known as the fastest ship in the Star Wars galaxy, piloted by Han Solo and Chewbacca, this detailed replica of the rebel spacecraft packs powerful secrets and special modifications inside and out. Measuring more than two-and-a-half feet long, the Millennium Falcons uniquely circular style is ready to blast off with light-up headlights and loads of electronic vehicle and weapon sounds, including engine boost, cruise mode, fly-by, firing cannons and much more! Open the light-up cockpit and fit up to four figures inside. The vehicles comes with Han Solo and Chewbacca figures and can hold up to 16 more (each sold separately) inside its secret smuggling compartments, pivoting gunner station or missile-firing mini-fighter vehicle. Remove the outer panels to access the ships interior. Then, head for the medical bay to treat wounded troops! Activate deployment sounds and landing lights with the auto-opening boarding ramp. Or plan your attack against the Empire with a pivoting gunner station, rotating laser turret and 3-missile launcher, with plenty of realistic blasting sounds and projectiles to keep enemies at bay. A pivoting training probe makes lightsaber and movement sounds for those who wish to practice their Force fighting skills. Trigger more than 20 authentic movie phrases and sounds from the voices of Han Solo, Luke Skywalker, Obi-Wan Kenobi, C-3PO, Chewbacca and R2-D2! Light up the hyperdrive engine lights and fly your imagination into the next constellation or the other end of your playroom! Add this impressive vehicle to your collection and recreate your favorite battle scenes, or strategize your own endless action adventures!
swcwfalcon
653569318439
277503
Out of Stock
New