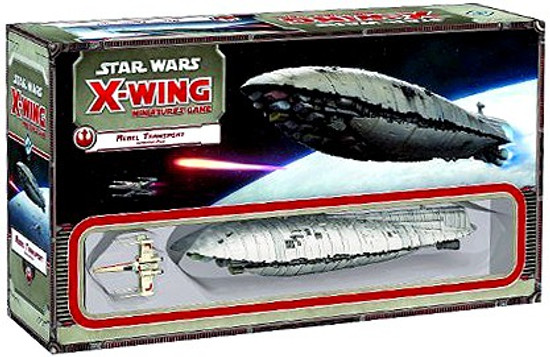 When the Empire launched a massive assault against the Rebellion's Echo Base, it dealt the Rebel Alliance a tremendous blow. Still, the Rebellion's losses could have been much greater. They were lucky to escape with the majority of their command structure intact and the very fact the Rebellion was able to continue its liberation efforts after the battle owed much to the GR-75 medium transport and the role it played during the famous evacuation effort. With new rules, one Rebel transport miniature, one X-wing miniature with an alternate paint scheme and a wealth of new ship cards, upgrades and missions, the Rebel Transport Expansion Pack for X-Wing allows you to recreate the drama of the Rebellion's desperate escape from Hoth. Its huge, pre-painted GR-75 medium transport miniature comes with rules for the "energy" that fuels its shields and unique attacks, as well as a new maneuver template that gives the transport the feel of a truly huge ship. Designed for use in Cinematic Play, the Rebel Transport Expansion Pack comes with three action-packed missions and it also opens all-new possibilities in the game's Epic Play format!
rebtranz
9781616616748
223292
Out of Stock
New