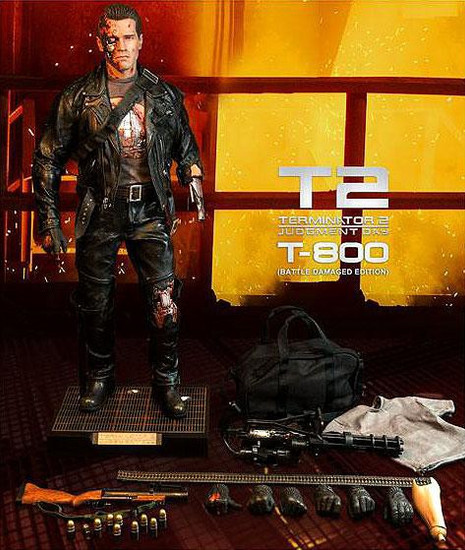 Product includes:
An incredible authentic and highly detailed likeness head sculpture of Arnold Schwarzenegger as battle damaged T-800 in the movie Terminator 2: Judgment Day.
Head sculpture has LED light in right eyeball (red light and battery operated).
A HD-4 battle damaged ABS action body with more than 30 points of articulation (Chest and left knee are the battle damaged area).
HD-4 action body comes with the interchangeable battle damaged left forearm (metal made),an additional normal version forearm will also be included.
Eight (8) pieces of interchangeable gloved battle damaged hands
Classic battle damaged costumes from the Terminator 2: Judgment Day movie. Several complicated procedures were done in order to create the vintage battle damaged look.
Mighty weapons include: M79 grenade launcher, Handheld M134 Mini Gun with bandoliers, 10 pieces of the M79 grenades, One (1) piece of the non-used M134 metal made bullet, six (6) pieces of the metal made M134 bullet shells; and a set of M134 bandoliers (plastic made)
The M79 grenade launcher is partially made of wood and some parts were made of metals. The M134 Mini Gun is made of both plastic and metal, there are barring inside the rotatable metal made barrel.
Other accessories include: A large black carrier bag (able to carry the M134 Mini Gun), a grey T-shirt (non-battle damaged) and a grenade holster for the M79 grenades
An exclusive Terminator 2: Judgment Day figurine stand
hdmasterpieceterminator2
4897020280927
122485
Out of Stock
New