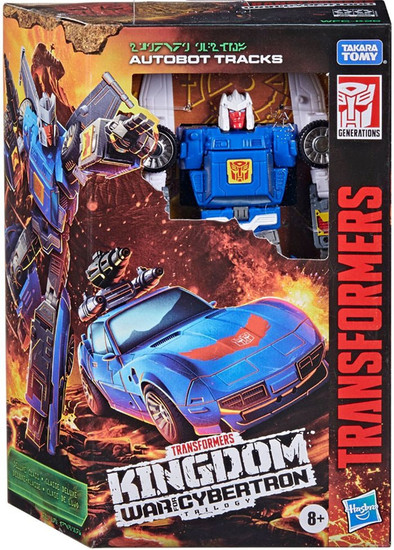 DISCOVER KINGDOM: Worlds collide when the Maximals and Predacons join the fight, coming together with the Autobots and Decepticons in an epic battle that will alter their destiny forever
BEASTIFY THE BATTLEFIELD: Unleash the primal power of the beasts with the ancient and highly advanced F.O.S.S.I.L. technology. Sentient Fossilizer bots, infused with primordial energy, break apart and weaponize their allies. Use Deluxe Fossilizer figures to beastify this Autobot Tracks figure with epic bone armor! (Each sold separately, subject to availability.)
G1-INSPIRED ALT MODE AND ACCESSORIES: This G1-inspired toy converts to sportscar mode in 21 steps. Convert from sportscar mode to flying car mode in 8 steps. Comes with missile launcher and blaster weapon accessories that attach to the figure in both modes!
GOLDEN DISK CARDS REVEAL POSSIBLE DESTINIES: Includes a Golden Disk card that reveals a possible destiny of a key character. Collect other Kingdom figures to reveal all 3 alternate destiny variants for each character! (Each sold separately. Subject to availability)
Includes Transformers Generations War for Cybertron: Kingdom Deluxe Class Autobot Tracks figure, Golden Disk card, 2 accessories, and instructions.
Figure scale: 5.5 inches
Ages 8 and up
Warning: Choking Hazard - Small parts.
Not for children under 3 years.
f03645l02tracks
359513
Pre-Order
New