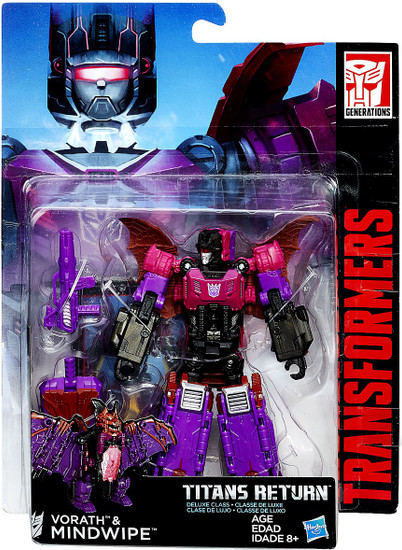 The Decepticons unite with Titan Master partners to power up for battle. Mindwipe and Vorath can destroy an Autobot target without ever picking up a blaster. Together, the Decepticon hypnotist and his Titan Master partner manipulate other bots to carry out their sinister plans. Mindwipe starts by casting his hypnotic spell on a bot, and then Vorath takes full control over their central processor. With that kind of power, Mindwipe and Vorath assemble teams of servants and bounty hunters that do their bidding for them, no questions asked.
This Transformers Generations Titans Return Deluxe Class Mindwipe figure converts from robot to vehicle and back in 16 steps. The Titan Master Vorath figure converts from robot to head and back in 1 step. Vorath figure becomes the head of the Mindwipe figure. When the Mindwipe figure is in vehicle mode, Titan Master figures fit inside. Additional Titans Return Titan Master figures each sold separately. Subject to availability. Also includes a blaster accessory and a collectible character card with tech specs.
Build the best roster for battle. The Titan Master Vorath figure can become the head for any Deluxe Class, Voyager Class, or Leader Class Titans Return figures (each sold separately). Or unite this Mindwipe figure with other Titan Master figures (each sold separately).