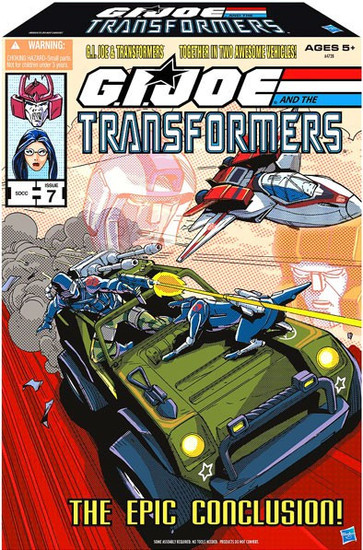 The packaging of the G.I Joe/Transformers mash-up exclusive is even a throwback it pays homage to a 1980s comic-book miniseries.
An old-school G.I. Joe V.A.M.P. vehicle is retooled in the deco of Autobot cult fave Hound, originally an Army Jeep in the cartoon.
The set stars a G.I. Joe Skystriker with a paint job inspired by the Autobot, Jetfire.
No G.I. Joe set is complete without the resident ninja commando Snake Eyes this time sporting an Autobot logo on his outfit.
If youre so inclined, you can have the Cobra femme fatale Baroness take Decepticon Ravage out for a walk.
The Decepticon character Bludgeon inspired this action figure of a robotic samurai warrior with a skeleton head.
The Autobot Blaster and his tapes shows up in the set in his boom-box form. (Kids, ask your parents what a boom box is.)
sdcc13joetransformer
653569860044
264317
Out of Stock
New