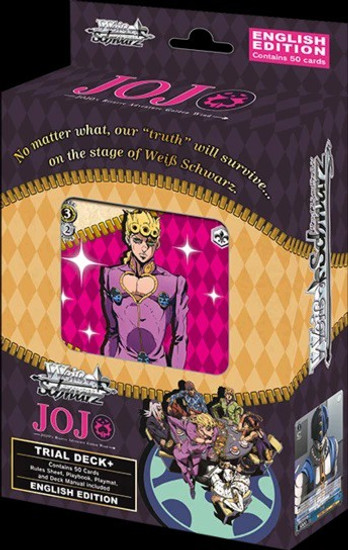 Join Giorno Giovanna as he joins the gang "Passione". Together with Bucciarati and other members of his team, battle against others to fulfill his dream of on his journey to becoming a Gang-Star!

SIGNED CARDS
Every pack has a chance to contain a sign card by the voice cast!
Kensho Ono (as Giorno Giovanna)

NEO-STANDARD DECK CONSTRUCTION
The cards in this Trial Deck+ may be used together with cards which have their card number beginning with "JJ/"!

Parallel Cards
Parallel cards are randomly sealed into decks!
Every deck contains 2 shiny cards!
In addition, every deck you purchase has a chance to contain one of the following!
[RRR] Rare cards with special embossing (3 types)
[SP] Sign card of voice cast (1 type)
weissjojogoldenwindtdplus
8885009405399
317428
Out of Stock
New