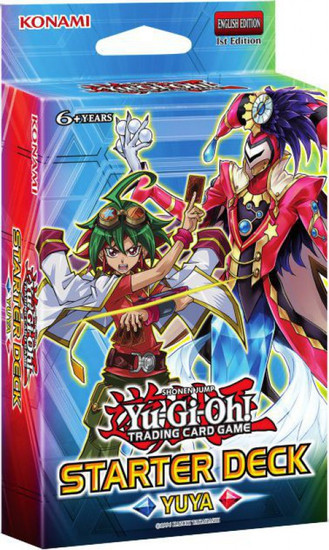 Fans of the Yu-Gi-Oh! animated series will be delighted to Duel with cards used and inspired by Yuya, the main protagonist in the newest generation of the Yu-Gi-Oh! manga and animated series, Yu-Gi-Oh! ARC-V. Starter Deck - Yuya is a pre-constructed Deck right out of the box, making it the perfect way for new Duelists to be introduced to the Yu-Gi-Oh! TRADING CARD GAME. With 10 brand-new cards like Performapal Sleight Hand Magician and a new Performapal themed Deck, Starter Deck Yuya is an exciting Deck to own for all Duelist!

Starter Deck Yuya will also be another way for Duelists to obtain popular cards to build out their Deck! Lightning Vortex, Book of Moon, and Pendulum Reborn are just a few of the many unique previously released cards, making an encore appearance in Starter Deck - Yuya!