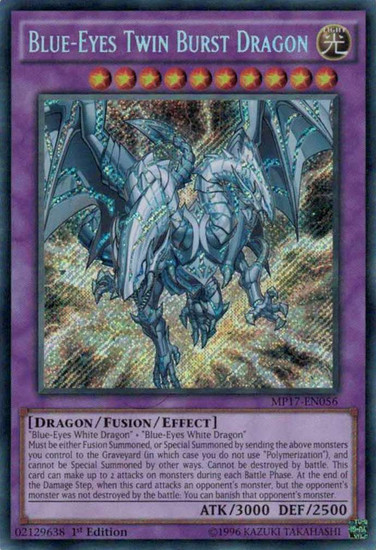 Light. Dragon/Fusion/Effect. 10. "Blue-Eyes White Dragon" + "Blue-Eyes White Dragon"Must be either Fusion Summoned, or Special Summoned by sending the above monsters you control to the Graveyard (in which case you do not use "Polymerization"), and cannot be Special Summoned by other ways. Cannot be destroyed by battle. This card can make up to 2 attacks on monsters during each Battle Phase. At the end of the Damage Step, when this card attacks an opponent's monster, but the opponent's monster was not destroyed by the battle: You can banish that opponent's monster.
mp17en056
604966626290
170294
Out of Stock
New