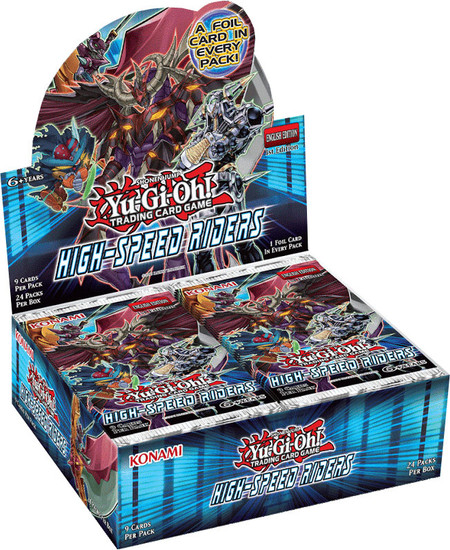 The High-Speed Riders special booster set contains brand new Synchro cards and cards inspired by the Yu-Gi-Oh! 5Ds era, plus a great selection of other cards to round out a Duelists Deck-building efforts! Dash into battle with brand new cards and popular cards thatll make your opponents heads spin!

Fans that want to fortify their Extra Deck can check out the new Speedroid and Hi-Speedroid monsters! Fans of Jack Atlas from the Yu-Gi-Oh! 5Ds and Yu-Gi-Oh! ARC-V animated and manga series will be treated to new cards played by him, like the awesome Hot Red Dragon Archfiend Abyss. Many of these cards, plus other popular cards like Red Dragon Archfiend, will have synergy with the Crossed Souls booster set and the upcoming Dimension of Chaos booster set.

In addition to the many Deck-Building options that Duelists have at their disposal, theyll also be able to fill up their Decks with many other coveted cards, making this set perfect for beginning and intermediate level Duelists!