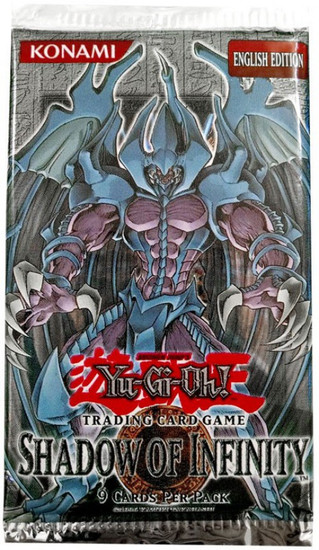 Shadow of Infinity (SOI) is the 18th booster pack released in the Yu-Gi-Oh! Trading Card Game. This set includes the 3 "Sacred Beasts" from the television series Yu-Gi-Oh GX, new support cards for the Cyber Dragon and "Ancient Gear" series, two powerful new Ritual monsters, and a great number of Insects. Some monsters on this set also have similar effect - which is an effect that depends on the amount of another copies of themselves in your Graveyard - despite all of them not being members of an archetype. This set was also released in a special edition box that included three Shadow of Infinity packs and one of four variant cards (Riryoku, Acid Trap Hole, Mesmeric Control, or Windstorm of Etaqua). Highly sought after cards include Treeborn Frog, the aforementioned Ritual Monsters, and the 3 "Sacred Beasts". Pictured on the cover is Raviel, Lord of Phantasms, one of the Sacred Beasts.
yugiohshadowinpack
053334471190
190237
Out of Stock
New