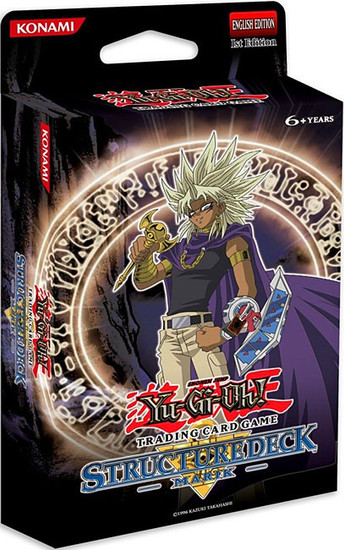 From the deserts of Ancient Egypt to the streets of Battle City, Structure Deck: Marik unites the incredible forces of the Tomb Keepers and Rare Hunters into a single Deck, modeled after Mariks Deck from the original Yu-Gi-Oh! animated series.
Structure Deck: Marik includes a 40-card, tournament legal Deck with cards like Lava Golem, Gil Garth, Legendary Fiend, Metal Reflect Slime, and Mirror Force! It also comes with a full assortment of Gravekeepers monsters, protecting the treasures of the Kings of Egypt!

As a special bonus, Structure Deck: Marik also includes 2 additional Ultra Rare cards: Temple of the Kings and Mystical Beast of Serket! These cards used by Odion while he impersonated Marik in the Battle City finals bring the total of this Structure Deck to 42 cards.