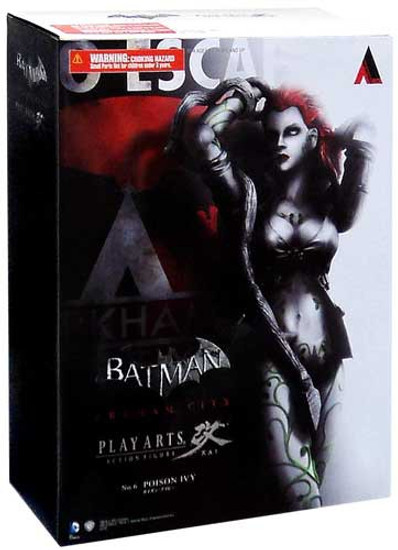 Due to the fragile nature of Play Arts we cannot accept returns on opened product. We inspect each figure before sending it out, but sometimes figures can be damaged in transit. Please make sure to inspect your figure for damages before opening it.
Out of Stock
(You save )

A Japanese import from Square Enix! Making their appearance in the Play Arts ~KAI~ line are Arkham inmates Harley Quinn, a femme fatale born from a mad love, and Poison Ivy, the botanist turned evil enchantress. With her chlorophyll blood and green skin color, Poison Ivy is a plant-human hybrid. She uses her seductive charms and mind controlling pheromones as her primary weapons. Making her second appearance to the Play Arts line, Harley Quinn is the self-proclaimed girlfriend of Batmans arch nemesis, the Joker. Shes fallen so madly in love with him that she changed the way she looks to match his appearance! Harley Quinn (8.7 H) comes with exchangeable hands, bat, and two Uzis. Poison Ivy (8.5 H) comes with interchangeable hands, plant stand, and two articulated vines. Both figures come with display stand included!
arkhamcity3poison
662248812472
122496
Out of Stock
New