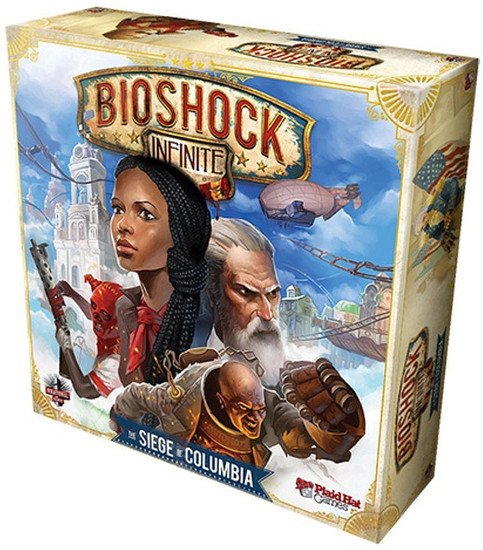 BioShock Infinite: The Siege of Columbia board game, based on the critically acclaimed BioShock Infinite video game, allows players to explore the world of BioShock Infinite--the atmosphere, the characters, the city of Columbia itself and even contours of the game's plot--from a tantalizing new perspective as the leaders of the Founders and Vox Populi factions Set during the same series of events as the video game, players take on the role of the Founders and Vox Populi factions, desperately seeking to seize control of Columbia. Gain points from staking your claim to the city's territories and accomplishing other goals, all the while fighting your opponents and Booker while trying to influence Elizabeth and commanding an army of detailed miniatures as well as the Songbird and Airship! In BioShock Infinite: The Siege of Columbia, each player uses their unique deck of cards to influence world events, build their army, fight off Booker, zoom around the city on the Sky-Line and claw their way to ultimate control of Columbia.
670541597613
670541597613
253442
In Stock
New