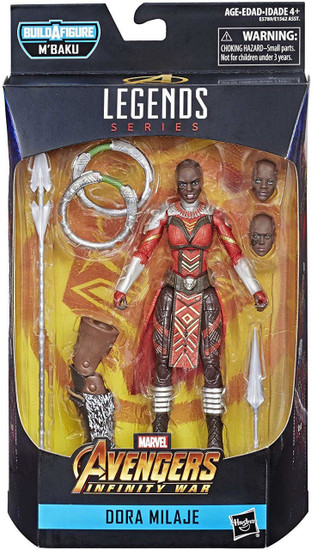 Wakanda forever! Members of the Dora Milaje prepare for battle alongside their king, TChalla, to defend Wakanda and protect the world from Thanos evil plans. Imagine the fierce female warriors battling alongside Captain America, Iron Man, Thor, Spider-Man and the other Avengers with this 6-inch scale Dora Milaje figure.
This Marvel Legends Series action figure includes Dora Milaje-inspired alternate heads, rings, long spear, and short spear accessories that make a great addition to any Marvel Legends Series collection. Kids and fans alike can appreciate the Wakandan female warrior and imagine the action-packed scenes of the Marvel Universe and Avengers: Infinity War with this premium Dora Milaje figure, inspired by the character from the Marvel Cinematic Universe that includes the Black Panther movie.
Featuring multiple points of articulation for high poseability, fans and collectors can display the Marvel Legends Series Dora Milaje figure in their action figure and vehicle collection to recreate scenes from Marvel entertainment and comics.
doramilajelegends
630509786886
269287
In Stock
New