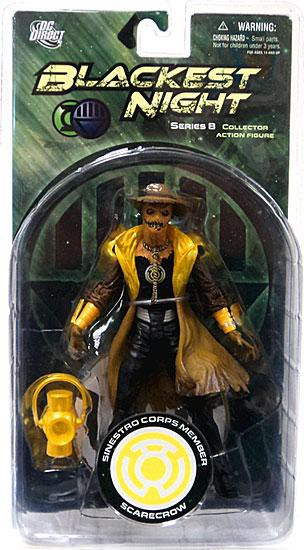 The hugely successful BLACKEST NIGHT action figure line continues!
Included in this eighth installment of the series are: Black Lantern Black Flash, Professor Zoom's reanimated corpse, holds curious sway over The Flash's other undead rogues; Orange Lantern Lex Luthor, the new Orange Power Ring seeks out Lex Luthor for his avarice and lust for power; Indigo Tribe The Atom, with compassion and sense of duty stronger than ever, Ray Palmer serves as the binding force uniting the spectrum of power; Sinestro Corps Member Scarecrow, delights in instilling fear in others and is rewarded with the Yellow Ring of Power.

The Sinestro Corps Member Scarecrow figure stands at 6.75" high, features multiple points of articulation and includes a display base. Character-appropriate accessories are also included.
sinestroscarecrow
761941296463
241941
Out of Stock
New