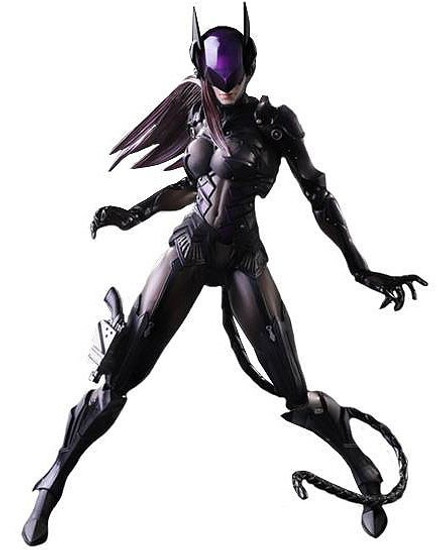 Due to the fragile nature of Play Arts we cannot accept returns on opened product. We inspect each figure before sending it out, but sometimes figures can be damaged in transit. Please make sure to inspect your figure for damages before opening it.
Out of Stock
(You save )

An Edgy New Vision of Catwoman!
All cats, no matter how beautiful, have claws. Like a panther, she is lithe and deadly, a nocturnal creature with a stunning physique that conceals lethal force. This new design, distinctly different from the classic image of Catwoman, is characterized by its aggressive and sleek silhouette.

The artist behind this concept is none other than Tetsuya Nomura, who has given life to many famous video game characters. From its inception, this design incorporated practical gimmicks into the costume, such as her long, limber tail which can be removed from her armored suit and used as a whip. The translucent visor can be freely opened and closed, and beneath it, the details of her face have been carefully reproduced to match her creator's specifications. The features of her face and body are apparent through her semi-transparent visor and the diaphanous panels of her costume. Her long hair is articulated to allow for a wide range of dynamic posing, while her extended claws add an imposing air to her appearance. She is truly an eye-grabbing figure.