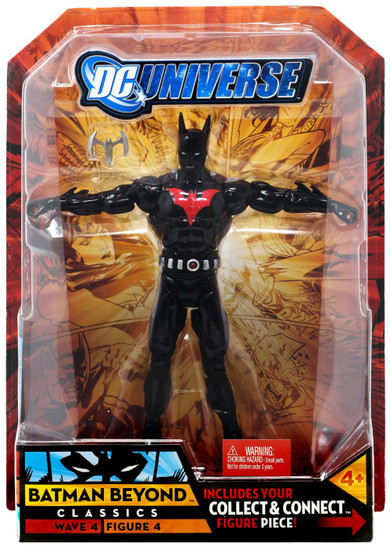 Save the world (and your collection) with these ever-popular heroes! From Mattel and the DC Universe, this exciting batch of 7-inch scale Action Figures features brilliant colors, tons of detail, and plenty of articulation. Plus, each amazing character comes with an extra accessory that enables you to build a special bonus figure! Don't miss out on this exceptional assortment!

Batman Beyond: Batman Beyond is characterized by a sleek black, almost featureless uniform with a moderate utility belt and a chest-borne red bat insignia. The Beyond costume is a mechanized suit developed too late in life for Bruce Wayne to utilize it to full potentiality. The suit is instead commandeered by a vengeful Terry McGinnis, initially as a measure to avenge his fathers murder. The Beyond costume bolsters heightened strength in addition to providing jet boots, built-in glider wings, and a stealth function.
dc4batman
027084596199
117597
In Stock
New