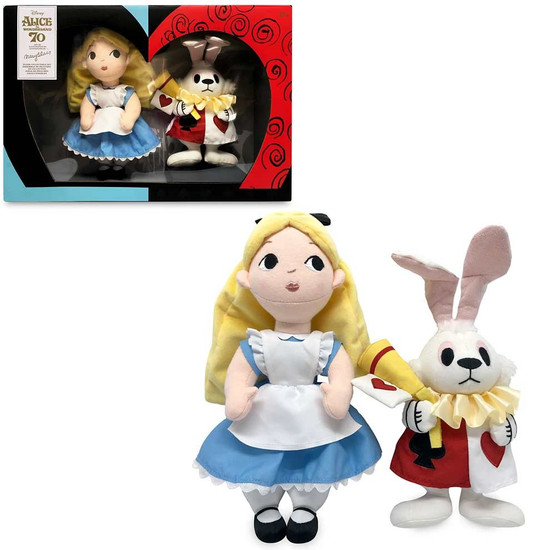 Don't be late for an important date with our limited release plush set inspired by pre-production art for Alice in Wonderland by Disney Legend Mary Blair. Featuring Alice and the White Rabbit, these collectible, uniquely detailed plush toys are in a world all their own.
Magic in the details
Limited Release
Set of two plush figures
Includes Alice in her iconic pinafore dress and the White Rabbit in his royal uniform
Styled after Mary Blair's archival inspirational art for Walt Disney's Alice in Wonderland
Detailed plush sculpting
Embroidered features
Varied fabrics
Lace and satin trims
Soft fill
Comes in window display box
Disney Legend Mary Blairs inspirational pre-production work helped set the visual tone for Walt Disney's 1951 animated feature Alice in Wonderland. She received co-credit for ''Color and Styling'' on the film
Celebrating the 70th Anniversary of Walt Disney's Alice in Wonderland
412344135483
412344135483
372853
In Stock
New