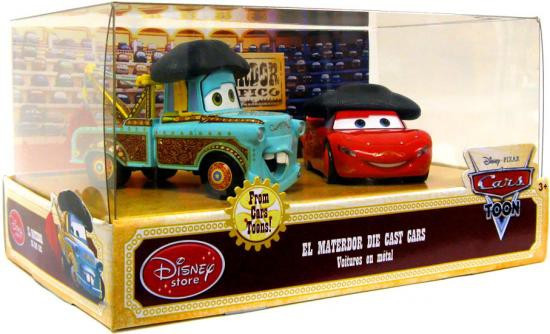 Lightning McQueen and Mater drive by a herd of bulldozers near Radiator Springs. Mater tells McQueen that they are just like the one he used to fight. The film goes to Spain in a stadium full of fans. A bulldozer enters the stadium and fights Mater. Mater has his red cloth and the Bulldozer chases it. Every time the Bulldozer missed Mater, Mater and the crowd say "Ole!". The bulldozer gets ready to charge at Mater. Mater taunts the Bulldozer and it charges. Mater spins around and the bulldozer falls over. As Mater turns to face the crowd the bulldozer charges again at Mater, this time bulldozing Mater into the ground. The red cloth falls onto the pile on dirt Mater is under. The crowd cheers. Mater's hood falls off. Suddenly more bulldozers enter the stadium and charge at Mater. He jumps and all the bulldozers crash into each other. Then a whole bunch of bulldozers enter the stadium. Back at Radiator Springs McQueen asks Mater what happened next. Mater reminded McQueen that he was there too. Back in Spain, the bulldozers chase Lightning McQueen because of his red paint job. At Radiator Springs McQueen told Mater that, it did not happen. Mater tells Lightning McQueen to tell that to the bulldozers, who chase him down the road.
elmaterdor148
843852033174
180811
Out of Stock
New