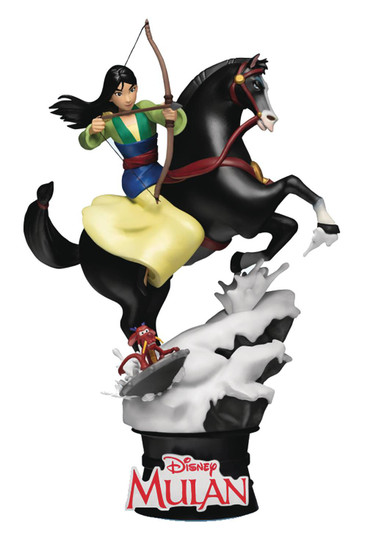 Released in 1998, the classic Disney animated film'Mulan'introduced movie goers to a new type of warrior princess, filled with honor and resolve.
Adapted from ancient Chinese poetry, Mulan is described as a formidable female heroine, who proves to her family and friends that she is a force to be reckoned with. A story that is just as important to today's youth, Mulan is an aspirational tale for all to enjoy.
With the upcoming release of the live-action movie, Beast Kingdom proudly takes you back to the original animated classic with the release of the D-Stage Mulan figurine. Standing at an impressive 6inches in height, Mulan is seen riding ?Khan?in the snow dressed in her traditional clothing and brandishing her bow and staff! Accompanying Mulan is her trusted sidekick Mushu, riding a wave of snow into battle.
With a branded base and a great attention to detail, this D-Stage release is for all fans of strong female characters. One not to be missed!
mar208063
4710586068375
330115
Out of Stock
New