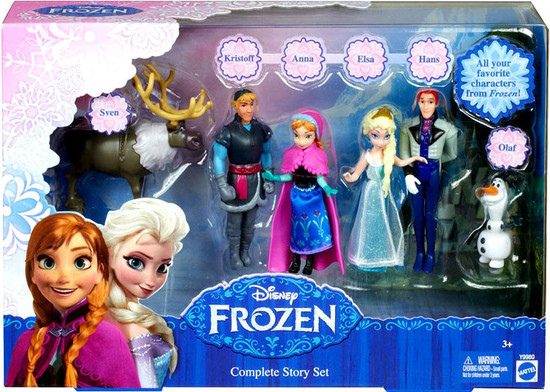 The Disney film Frozen introduces a new cast of characters who reside in the Kingdom of Arendelle. Their story is one of epic adventure and nonstop magic! Here, the entire cast of characters comes together in one complete story gift set that will charm and delight fans of the film. Sisters Anna and Elsa are adorable as small dolls wearing their signature fashions from the movie. Girls will recognize Anna's Norwegian rosemaling-inspired design on her removable skirt; Elsa's is a sparkling blue. To keep warm, both sisters wear their iconic capes: Anna's a sweet pink and Elsa's a sheer ethereal white. Prince Hans is also dressed formally, wearing a molded tuxedo. Brave Kristoff, the mountain man, is included too, dressed in his wintry woolens that include large mittens, a warm cap and a colorful belt around his cozy vest. Friends Olaf, a snowman, and Sven, Kristoff's loyal reindeer, complete this set that will allow girls to play out and expand upon this heart-warming story.
Set includes four small dolls and two figures. Dolls cannot stand alone. Ages 3 and older.
frozenset
746775264208
80377
Out of Stock
New