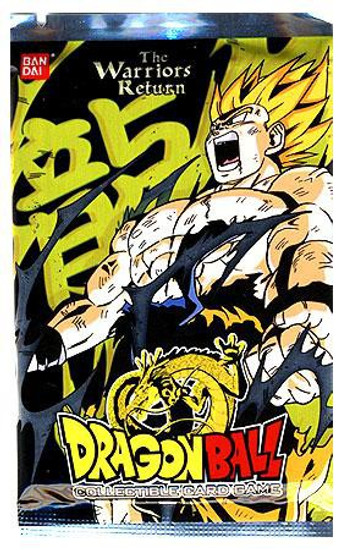 "The Warriors Return" marks the return of the Dragon Ball and Dragon Ball Z characters to CCGs. The first release for the Dragon Ball CCG introduces 113 brand new cards with most cards utilizing all new artwork never released in the United States.

This debut set has some of your favorite Warriors from the Dragon Ball and Dragon Ball Z universe such as Goku, Krillin, Master Roshi, Gohan, Cell, Vegeta, and Frieza. Your Warriors will be able to use special Technique cards like Kamehameha, Kaio-ken or Janken-Goo. Special Event cards like World Martial Arts Tournament can affect the outcome of your current battles. Also, if you collect all 7 Dragon Balls you'll be able to utilize special Wish cards with powerful effects that can help you defeat your opponent.

"The Warriors Return" will bring Dragon Ball and Dragon Ball Z back to prominence and foreshadow the return of Dragon Ball GT in upcoming sets.

Special Note!: The Dragon Ball game system is based on the popular Naruto CCG system and with special side rules players from each game will be able to compete against each other!
dbzwarriorreturnp
045557193270
195424
Out of Stock
New