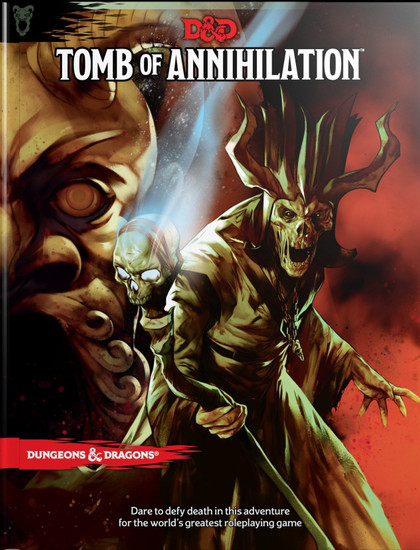 Dare to defy death in this adventure
for the worlds greatest roleplaying game
The talk of the streets and taverns has all been about the so-called death curse: a wasting disease afflicting everyone whos ever been raised from the dead. Victims grow thinner and weaker each day, slowly but steadily sliding toward the death they once denied.

When they finally succumb, they cant be raisedand neither can anyone else, regardless of whether theyve ever received that miracle in the past. Temples and scholars of divine magic are at a loss to explain a curse that has affected the entire region, and possibly the entire world.

The cause is a necromantic artifact called the Soulmonger, which is located somewhere in Chult, a mysterious peninsula far to the south, ringed with mountains and choked with rain forests.

An adventure for characters of levels 1 11, Tomb of Annihilation provides the Dungeon Master with the core adventure needed to create an exciting and memorable play experience.
Expands on the Forgotten Realms setting of Chult, providing extensive detail on the hidden peninsula, and includes a large pull-out map of the region.
Fans of the DUNGEONS & DRAGONS Roleplaying Game can expand and enhance their experience by participating in the D&D Adventurers LeagueTM organized play program while playing this adventure.
Adventure design by Christopher Perkins, Will Doyle, and Steve Winter, with additional design by Adam Lee.
Story consulting by the award-winning creator of Adventure Time, Pendleton Ward.

The leader in providing contemporary fantasy entertainment, Dungeons & Dragons is the wellspring for the entire modern game industry, digital as well as analog. This newest edition draws from every prior edition to create a universally compelling play experience, and exemplifies the true spirit of a game that holds captive the hearts and minds of millions of players worldwide.
wcdd5toa
9780786966103
296306
In Stock
New