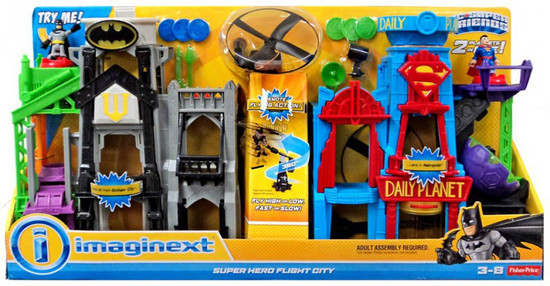 Young Super Heroes' imaginations will be flying high when they combine two worlds into one with the Imaginext Super Hero Flight City playset. 4 Power Pads get the action started. Turn the top Power Pad on the Gotham City side to have kids' favorite Super Hero take flight. It even provides 360-degree flying action!) Spot trouble below? Turn the second Power Pad to reveal a projectile launcher that can do battle with any villain. "Ha, ha, ha. Hello, Batman!" Don't forget about The Joker who has his own elevator and pie launcher that shoots 4 discs in a row by pushing the trigger. He could break into Wayne Manor through the secret door in back! Catch The Joker once and for all by activating the trap door on the landing pad. Now head down and log into the bat computer - your mission is complete! (The Joker figure sold separately.) Superman and Lex Luthor have their own cool gadgets, too! Uh, oh, Lex Luthor is on the loose! Catch him on the landing pad and put him away for good in the Metropolis jail. (Just make sure he doesn't escape through the secret hatch!) (Lex Luthor figure sold separately). Imaginext ... Turn on Adventure!
imagheroflight
887961219067
137656
Out of Stock
New