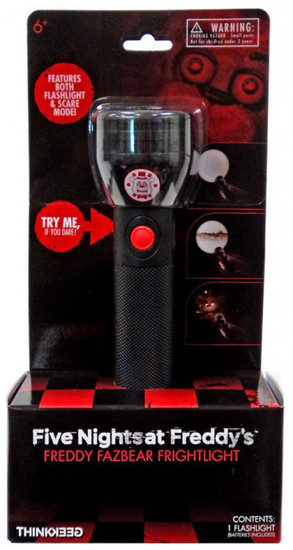 The situations in which you need a flashlight are usually pretty scary already. A thunderstorm hit, and your power's gone out. You need to go look in that shed in the backyard which might or might not now be inhabited by snakes and spiders. Or you're out in the woods at night, wondering what that noise was. It was just a raccoon. Or a possum. Right? Right?! Nope. It was an animatronic bear, set on seeing your stuffing. The Five Nights at Freddy's Flashlight has a switch on the back. In Flashlight Mode, it functions as a normal flashlight, lighting your way each time you press the button. As you hand it to your friend, you're going to surreptitiously hit the switch on the back to put it in Scare Mode. Sometimes it'll be a normal flashlight. Other times? You'll get to witness a literal jump scare when the it flickers, vibrates, makes noise, and displays animatronic's face. And then you'll have to pick the flashlight up off the ground, which will help you find your fleeing friend. After you stop laughing.
freddyfrightlightfred
847509012802
140132
Out of Stock
New