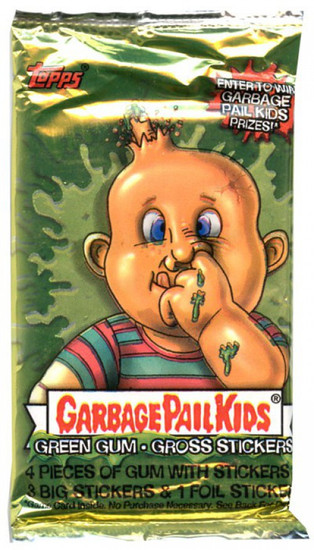 If you're a product of the '80s, there's no way you could've escaped the gross-out craze that swept the nation and made it cringe. The Garbage Pail Kids were one of the best-selling non-sport collector card franchises of the decade. Well, just when you thought it was safe to peel back a pack of Topps cards and chew the gum without gagging, they're back. That's right. The snotty, leaky, pus-oozing, nose-picking Garbage Pail Kids are making a cameo this summer, with reprints of the 15 original series, featured images from the unpublished and previously ?lost? 16th series, and delightfully wretched artwork from a creative team of artists, including Jay Lynch, John Pound, and Tom Bunk. Each pack contains 3 Garbage Pail Kids Stickers Plus 1 GPK Foil Sticker and 4 chunks of Bazooka bubble gum!
togapaki16tr1
041116137570
117083
Out of Stock
New